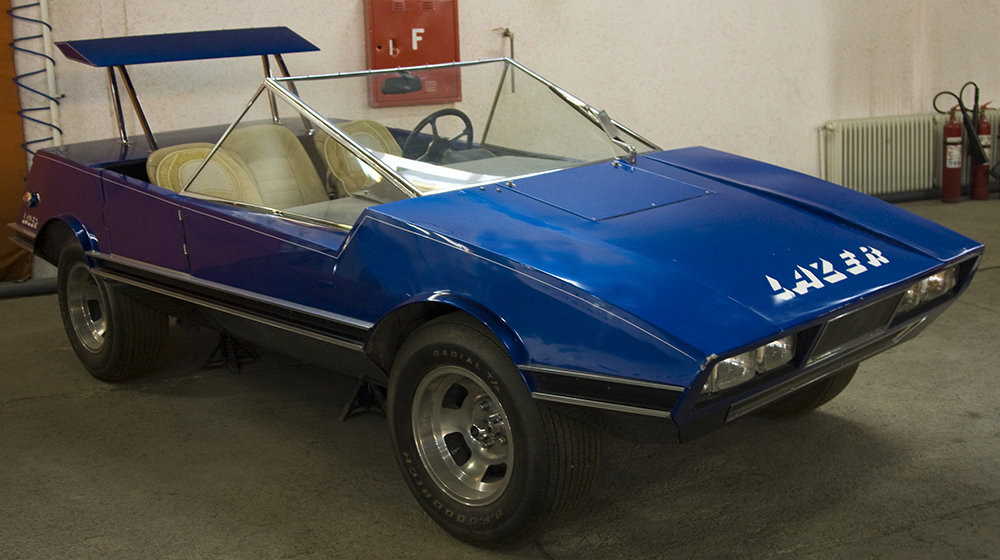 The Lazer was an open roadster sports car made in 1974. Only one was ever sold to a Canadian Panther importer who wanted a unique automobile as a surprise present for his wife. The car was to take its engine, manual gearbox, independent suspension and braking system from the Jaguar XJ12 although somewhere along the way, a 4.2-litre 6-cylinder engine was substituted for the V12,along with a J72-sourced rear axle. It was an odd 3-seat vehicle with a contemporary grand tourer body.

The car’s edgy aluminium bodywork housed a three-abreast passenger compartment with centrally-mounted instruments being housed in a prominent binnacle that was angled towards the driver. The OTT rear wing gave the car something of a “Wacky Races” appearance, although in overall terms the car’s design was quite respectable featuring energy absorbing bodywork with box-section crumple zones.

Although a visionary example of automotive design the woman for whom it had been built rejected this gift from her husband. Delivered in August 1974 the car was promptly returned to Panther’s UK premises where it languished for a couple of years before being sold to the Crown Prince of Iran Reza Pahlavi.